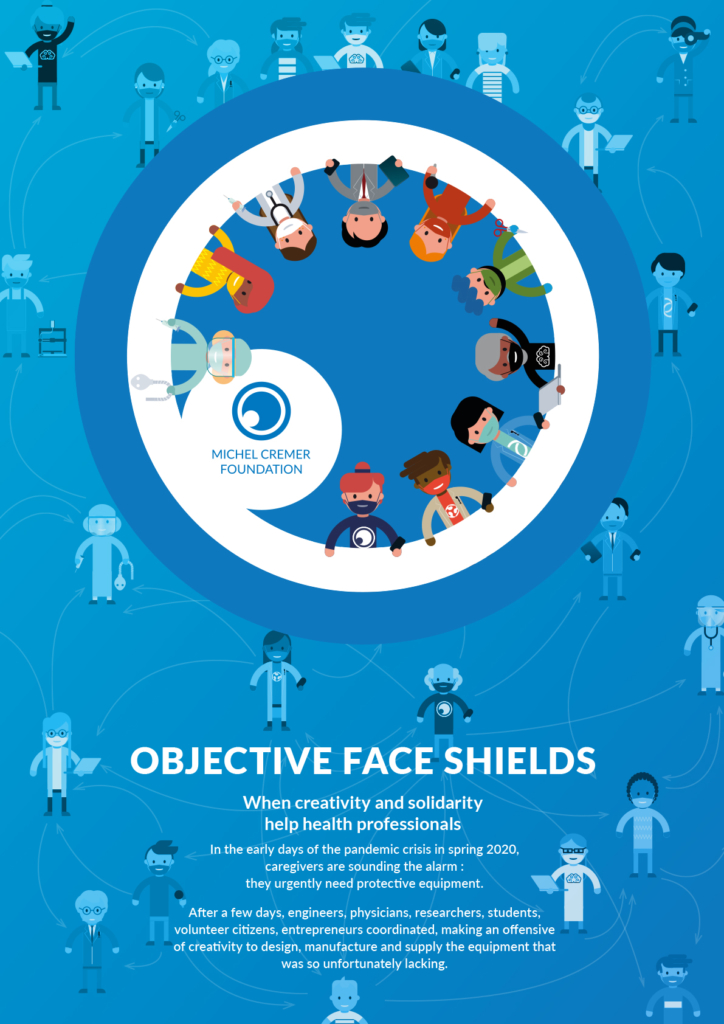 In March 2020, at the beginning of the pandemic, the Michel Cremer Foundation supported a new collaboration between doctors, engineers, technicians, designers and other scientists, in partnership with the Ecole Polytechnique de Bruxelles, the ULB FabLabs and the Hospital Saint Peter.

The objective: to meet the needs of caregivers and the front lines by providing them with protection equipment that was so lacking;

Together, these teams have designed protective devices that have been made available to both medical personnel and other categories of persons at risk, particularly in their professional activities.

From the beginning of this project, the Foundation took charge all the logistics of supply and distribution of masks to the various audiences in demand.

We wish to thank warmly  all the volunteers and those who have supported us in this extraordinary adventure.

You will discover the story that brought together physicians & engineers to produce and distribute more than 100.000 face shields in a few weeks.

The brochure is avalaible  HERE

You will find pictures, notes of “thanks” and press articles by clicking  HERE

Thanks to all for your support and help

wE STILL NEED YOUR help TO REALIZE OUR PROJECTS

We will get through these challenging times. 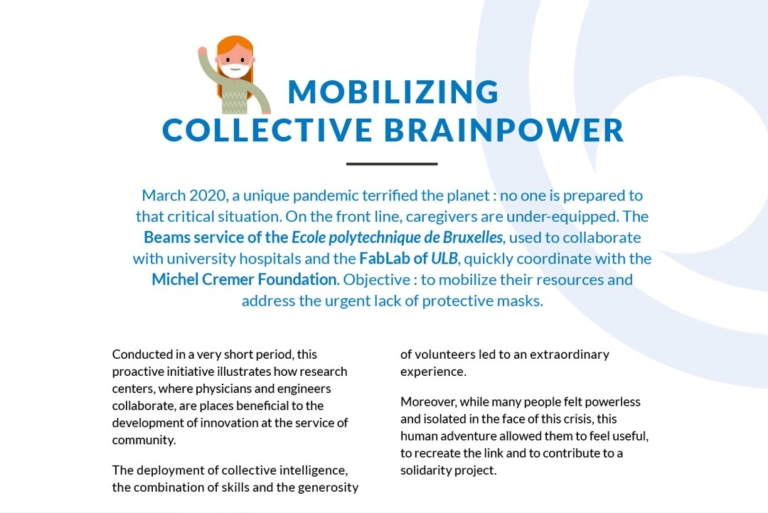 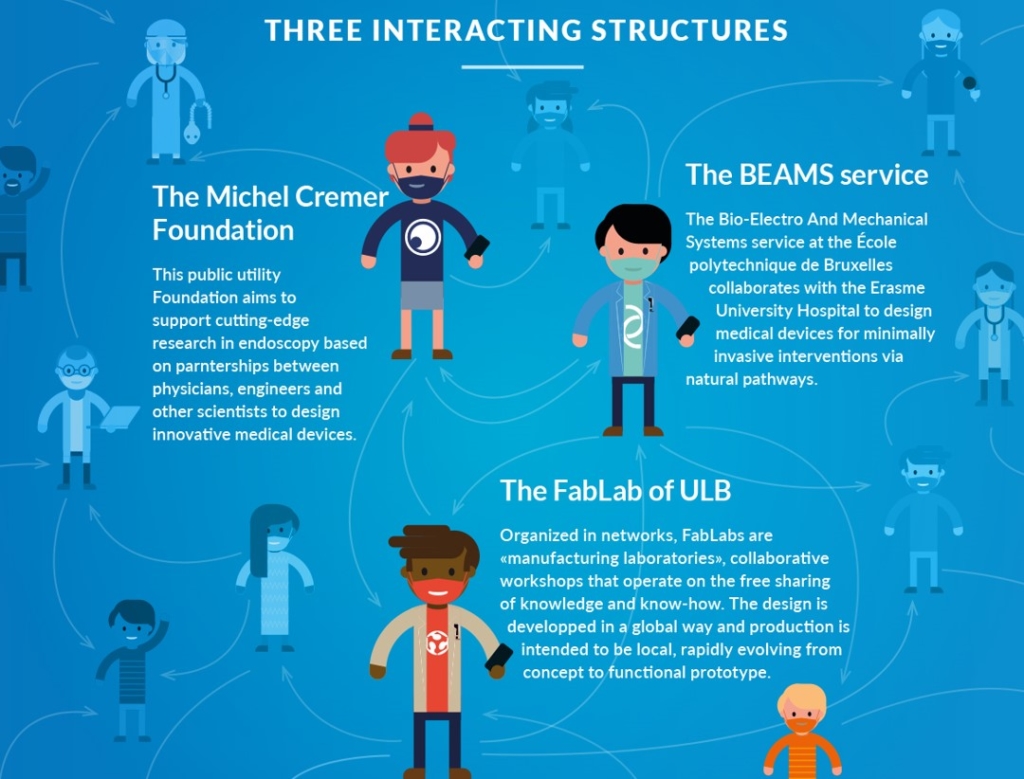 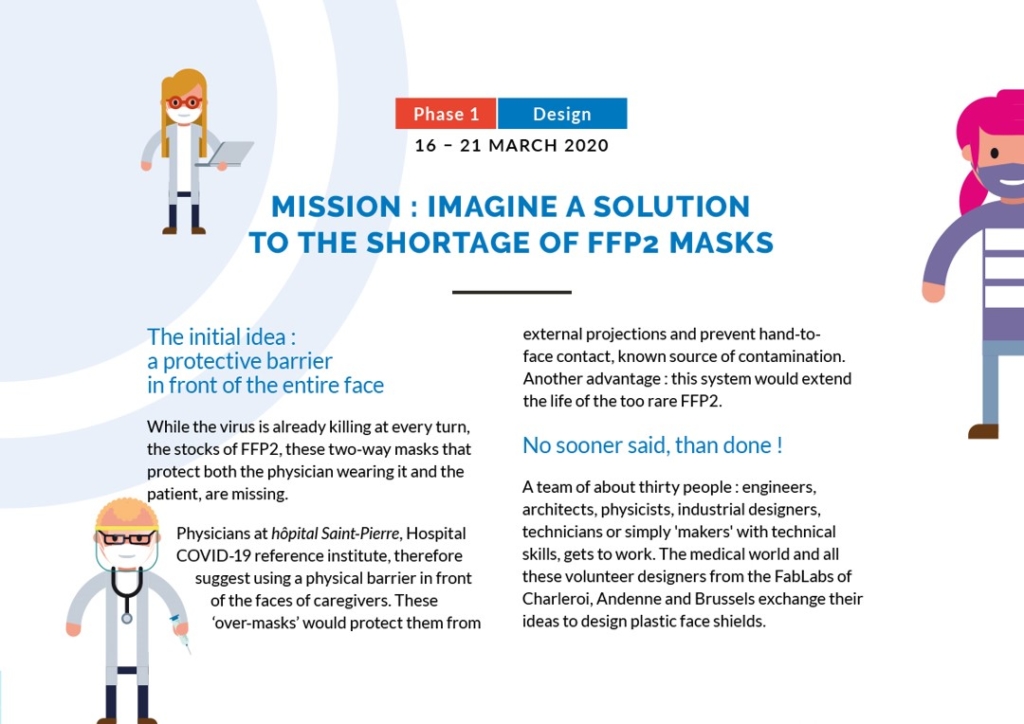 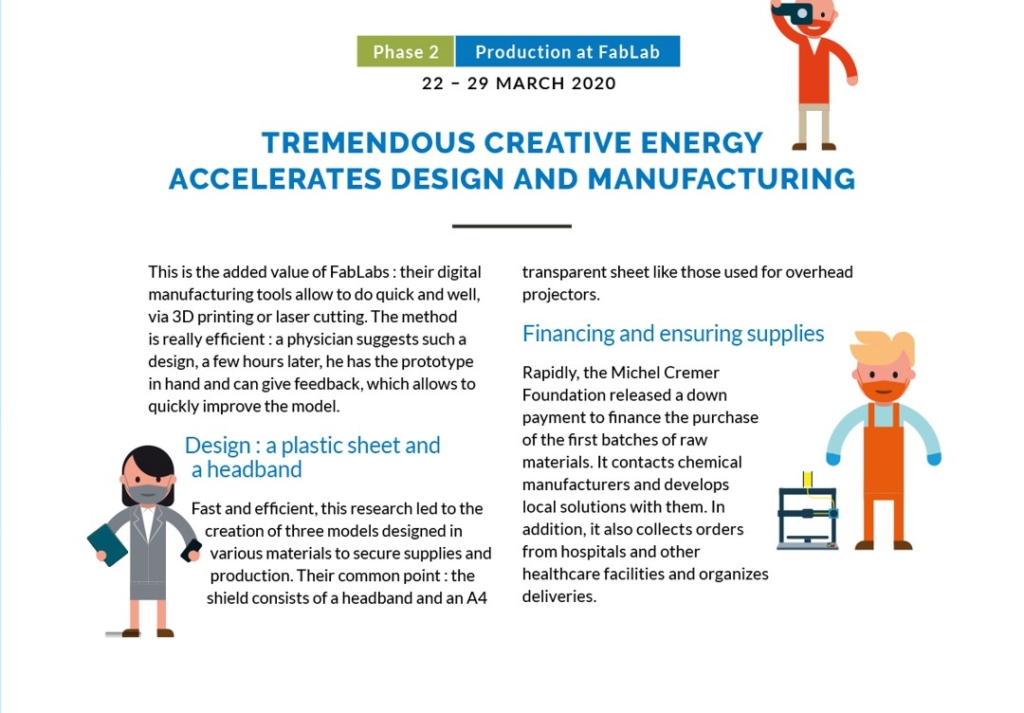 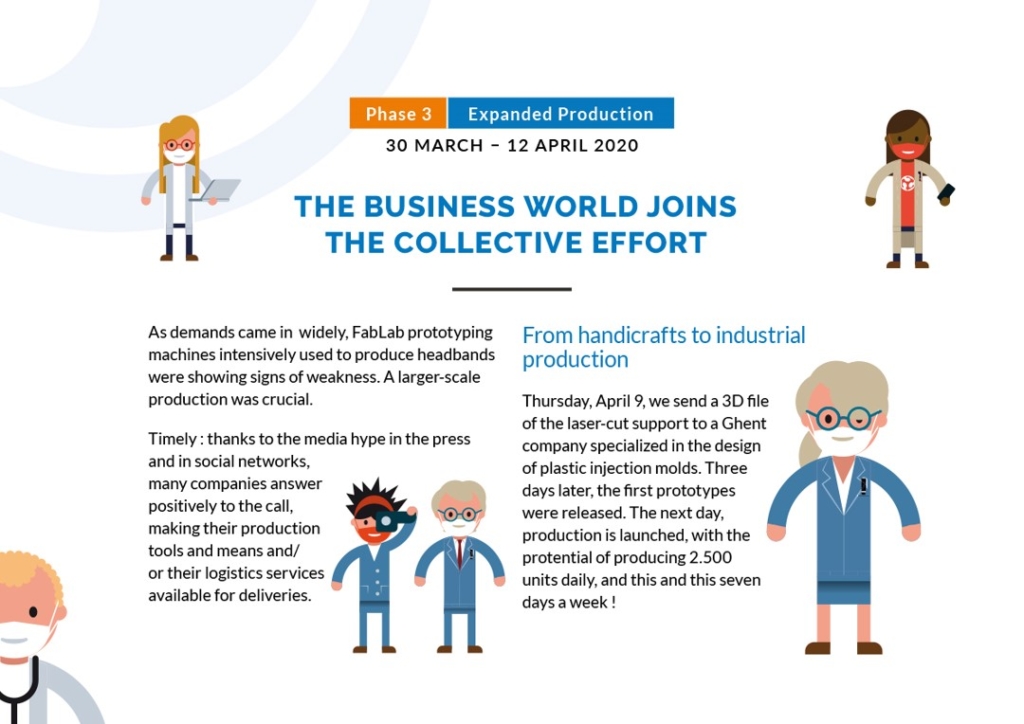 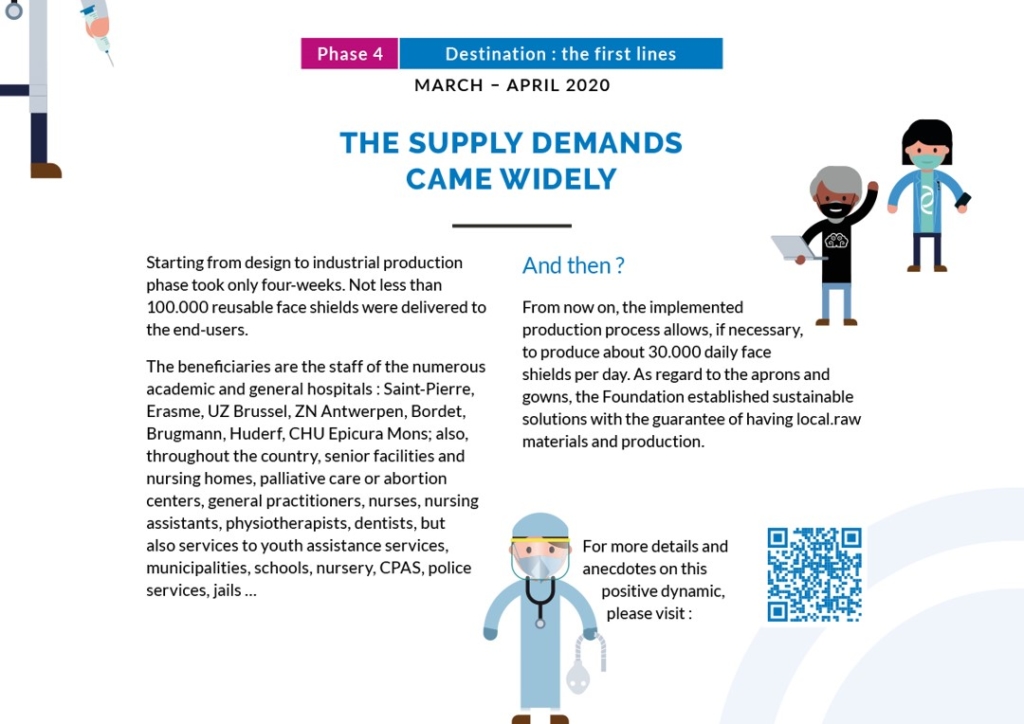 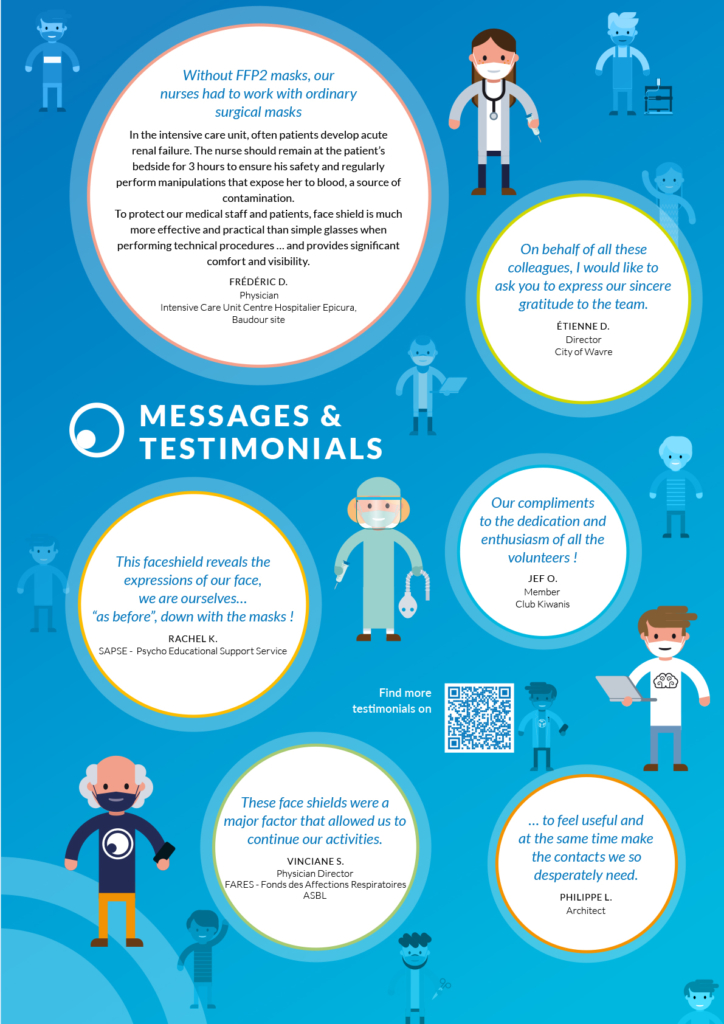 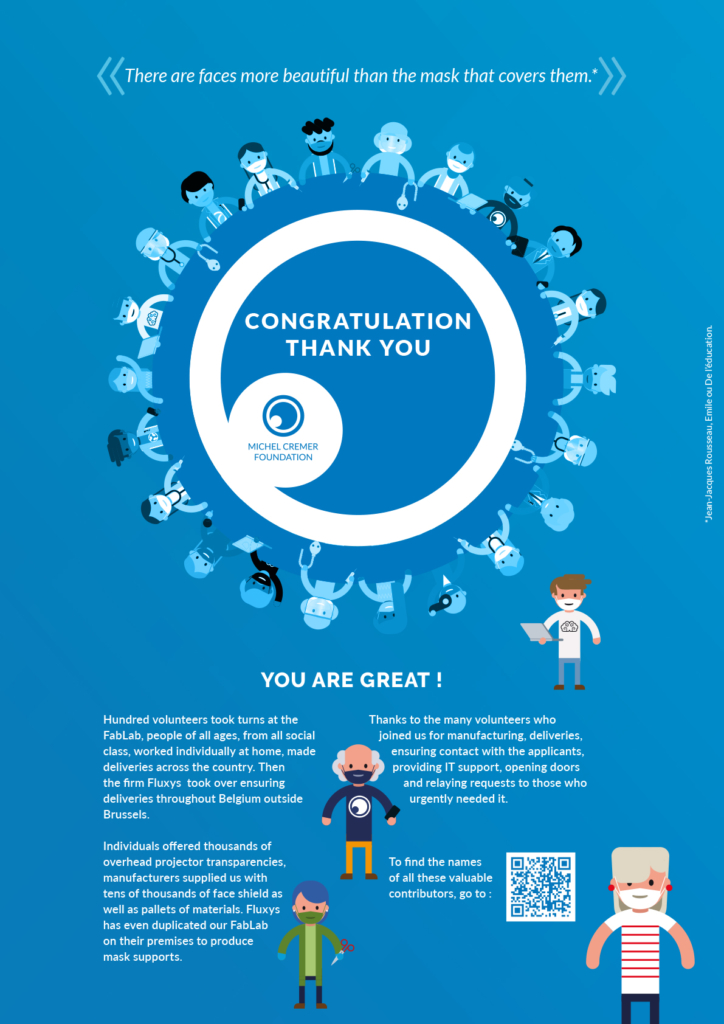 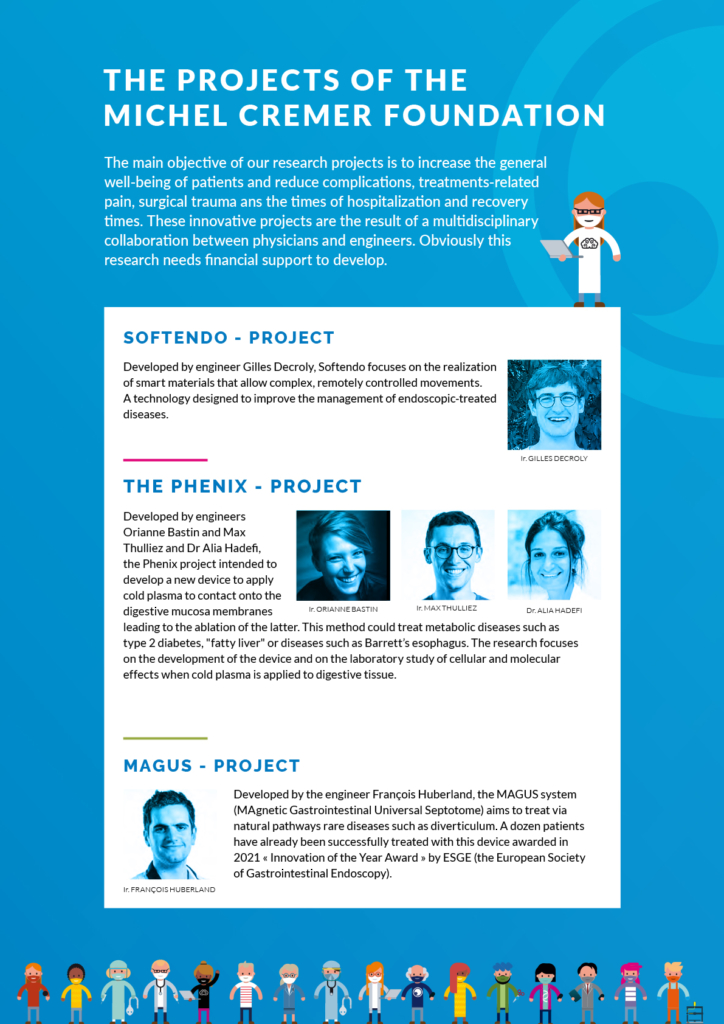 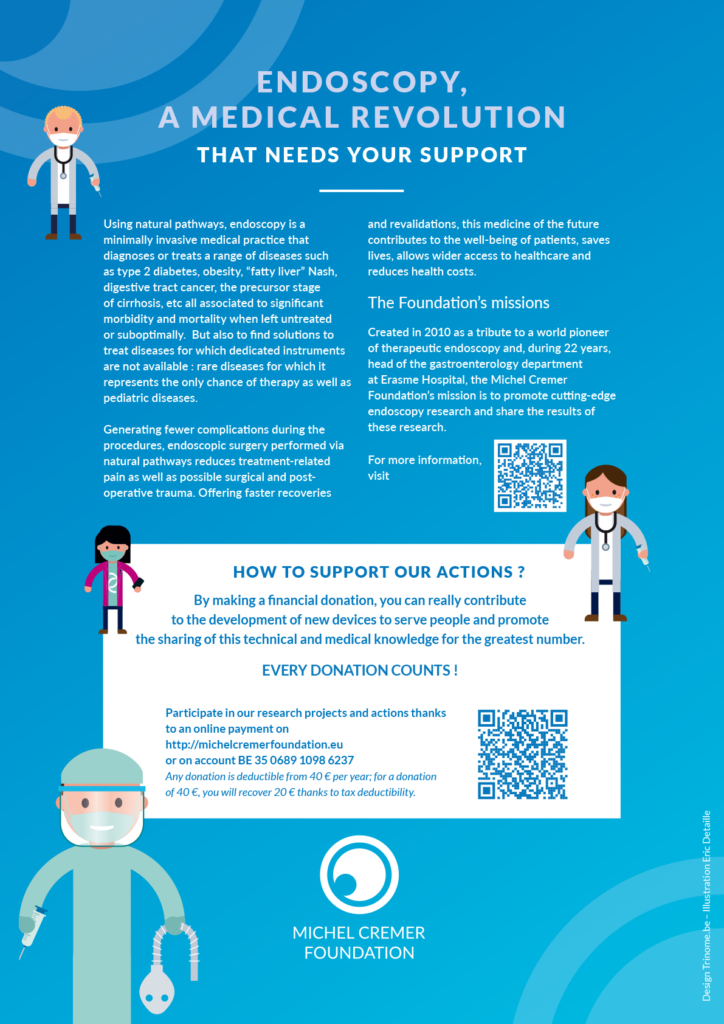 The Foundation contributes to the fight

THE MICHEL CREMER FOUNDATION SUPPORTS A NEW  COLLABORATION BETWEEN PHYSICIANS, ENGINEERS, DESIGNERS TECHNICIANS AMONGST OTHER SCIENTISTS. THIS COLLABORATION STEMS FROM THE “ECOLE POLYTECHNIQUE DE BRUXELLES”, “FABLABS” FROM THE “UNIVERITÉ LIBRE DE BRUXELLES” AND THE ST-PETER’S HOSPITAL, WHO ALL WANTED TO ANSWER THE CURRENT NEED FOR PROTECTIONS.

Together, these teams have conceived devices and made them available to the medical staff as well as other categories of people at risks, particularly on their work place.

these devices aim to allow them to protect themselves and reduces the risk of infection. From the launch of the project, the Foundation took charge of all the supplying logistics as well as the distribution of the masks to the people in need.With the support of a research team, students, alumni and from all the charity workers, we have distributed more than 140.000 faceshields within 3 moths (from March to June 2020).

The Foundation covers the expenses of the collaboration and takes care of the logistics support needed for the manufacture and distribution of the faceshields and aprons. This material has been given to numerous hospitals ( St-Peters, ULB Erasmus, UZ Brussels, ZN Antwerpen, Bordet, Brugman, Huderf, CHU Epicura of Mons…). In addition, demands keep growing in every regions of Belgium whether from hospitals, palliative care centers, abortion centers, rest homes, general practioner, nurses, kinesitherapists, dentists, Youth Service centers, townhall, nurseries, police stations, jailhouses, psy and now schools.

Our teams have also been asked to produce swabs and respiratory valves. Other companies are already taking care of it, and in particular Endotools Therapeutics, the Biomedical engineering service of the Polytechnical School of Brussels spin-off.

We want to sincerely thank people that helped us by making donation and gave raw material as well as means of production (3D Printers, laser cutting machines).

However, the fight has not ended yet. Numerous needs and demands are not answered to. We need your support to allow us to continue: by making a donation following this link or on the account of the Foundation BE 35068910986237 as well as material and 3D printers.

Thanks to relay information on social media

@ Do you need fACESHIELDS ?

If you do, please contact the Michel Cremer Foundation at covid@michelcremerfoundation.eu writing precisely :

These faceshields have been approved by the physicians and hygienists of St-Peter’s Hospital. You will find a sterilization protocol HERE.

You can find an overview of the faceshields HERE, broadcast in the RTBF News Program directed by Thibault Balthazar.

Prof. Alain Delchambre, Teacher at the “Ecole polytechnique de Bruxelles” and coordinator of the Fablab ULB describes the design and manufacturing process of the devices : here 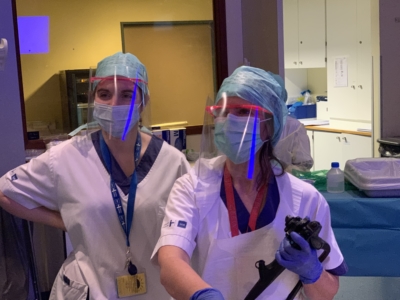 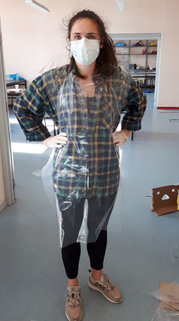 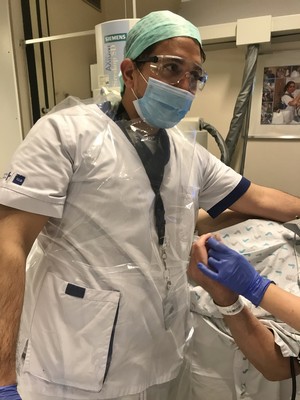 @Do you need aprons?

If you do, please contact the Michel Cremer Foundation at covid@michelcremerfoundation.eu writing precisely :

Those aprons have been approved by the physicians of the Erasmus Hospital. These “waterproof” aprons are designed to cover the medical staff’s cloth coat. 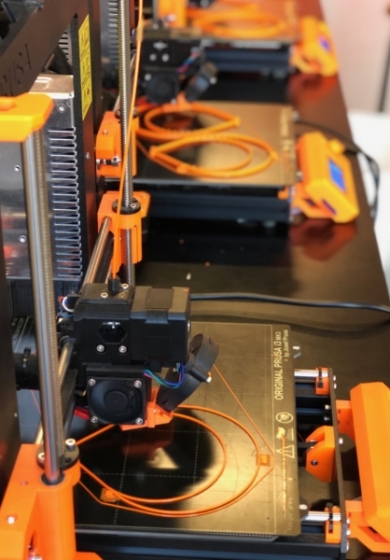 If you have a 3D printer or a Laser Cutting Machine, this message is addressed to you. If you have a privileged contact with a “Fablab” or if you know somebody that own such material.

The Free University of Brussels “FabLab” created masks models: printable in 3D or cuttable with a laser cutting machines.: You will find the open source design here.

The idea is very simple:

The masks can be delivered to the FabLab, in the former barrack , whose entrance is located at 8 Fritz Toussaint Street – 1050 Ixelles. Access map to the FabLab inside the barrack is available here.

@those who can help us with raw material

If you have raw material or know somebody has: 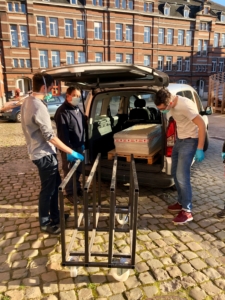 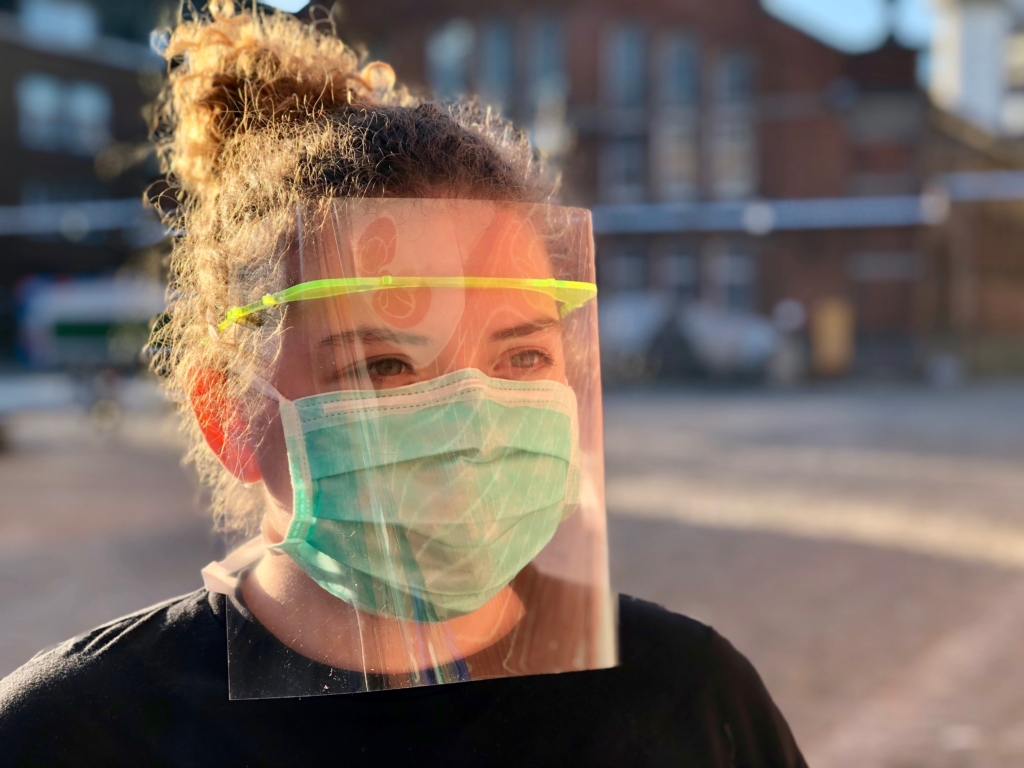 @Those who want to provide a financial assistance ?

If in the beginning of the outbreak, the Foundation was financially able to support the cost of the collaboration by covering the raw material and logistics expanses, the demands are exploding these days, we will not be able to cover the totality of the expanses made.

If you wish to support our action, you can make a donation to the Foundation: it could allow us to buy the raw material to produce the masks. With a 5 euros donation, the Foundation commits in giving 2 masks to diverse institutions through the country.

Donation are tax deductible from 40 euros by writing donation in the bank transfer communication field.

Thanks to relay information on social media